Mariners have a love hate relationship with passes (some call them inlets).  Love in the sense they are the opening to calm and safe harbors when it is rough and nasty in the open waters. Hate in the sense that they usually have swift currents flowing through them, the breakwaters are usually made out of very big rocks, and the openings are usually narrow. This introduces all sorts of interesting boat handling situations when the winds and waves are 90 degrees to the opening.  Even a wave that is traveling towards the open is not great. I don’t know who came up with the phrase, “Wishing you fair winds and following seas,” but I for one don’t care for a following sea. A following sea at times can be a difficult sea to handle.

In addition to the current and a breakwater made out of big rocks, Gordon Pass has two  characteristics which make it even more interesting. The first is that it only has one breakwater and that is on the south side.  This is great if you have a south wind blowing, but hang on if you have a west or even worse a north/northwest wind. The waves from these winds come into the pass bounce off the breakwater and create a confused sea in the inlet. Then you add current from an incoming or an outgoing tide and now things are real interesting. The second characteristic is that the north side of the pass has a long shallow area that causes the waves to standup and break when they are passing through it. Gee what fun. If you don’t get dumped in the breaking waves, you get a second chance of getting dumped dealing with the confused seas, and then you might get the opportunity to fight a stiff out going tide. If you do get dumped, you hope you and your boat don’t get crushed against the rocks and good luck finding you gear that gets taken out with the current. Oh and the beach just around the breakwater is private property. The rumor among the tribe is that the owner is a big Hollywood producer “The Force Be With You” that has guards who will highly encourage you to get off the beach. Ok, so lots of potential bad but If you make it through the pass you have some very nice calm waters and access to a waterway that is protected. The great part of this waterway is it goes all the way to Marco Island. GitUrDun and myself went through Gordon Pass in the 2007 EC during the daylight and it was scary exciting. I will never forget leaning back trying to keep the bow of my kayak from sinking into the backside of one of the braking waves and telling my boat “Keep your bow up and no turning!!! We don’t want to get broadside to this wave.”   Funny why I talk to my boat. Like the boat can hear me or do what I tell it. I mean it is an inanimate object but I know more than a few Watertribers who talk to their boats when things are getting hairy. GitUrDun and myself made it through the pass but it took a couple of minutes sitting in the calm water to catch our breaths and let the heart rate get back to normal.

Unfortunately the situation Riverslayer and I found ourselves in is that we could either go into Gordon Pass and find a nice campsite or spend another three hours paddling down to Marco Island. There we would face entering Capri Pass in the dark early morning hours, tired as all get out after paddling roughly 20 hours, and no guarantee that things would be any better at that pass. Capri Pass doesn’t have any breakwaters but does have plenty of shallow shoals and a serious current. Gordon Pass, here we come!  I needed a little excitement to wake me up anyway. You know sometimes the stars line up and everything falls into place perfectly. For Rod and myself that is what happened when we got to Gordon Pass. The wind died down to a gentle breeze, which meant no breaking waves and maybe no bugs, and we entered the pass just as the tide shifted to an incoming tide. The current was pushing us into the pass. Sweet!!! We just cruised into the pass talking about finding a campsite and how far east this big Hollywood producer’s land goes.

Finding a camp site at night is a little interesting in that you seem to lose your depth perception. A sand beach will look like a white wall or what looks like a sand beach is really a bunch or oyster shells. Or you cannot find any sand beach and it is just one long stretch of mangrove-covered bank. One thing that is guaranteed to happen is no matter what campsite you ultimately land at there will be one within a half of a mile of you that will be a far better campsite than the one you chose. It always happens which is why sometimes you will go a couple of miles looking for a site. Well not tonight, we were too tired. The first island that we came to had a lot of oyster shells on it but it did have a strip about 8 feet wide and 20 feet long that had sand over the oyster shells. Big enough for two tents so it would do. As we were setting up camp I noticed that Rod seemed to be setting his camp up in stealth mode. (Low profile so as to blend into the surroundings. We usually do this when we really are not supposed to be camping at the spot.) I know this was the first night we had camped together but I had to ask why he was settling his tent up that way. Come to find out he had forgotten to pack his tent poles so he was jury-rigging his tent for the night. This is a picture of Rod in his tent. Hmmmm comfyyyyyyy! By the way, he is in there sleeping. Not for me, I set my tent up with its poles. We both slept well that night even with the oyster shells, tent with no poles and no comfortable bed. 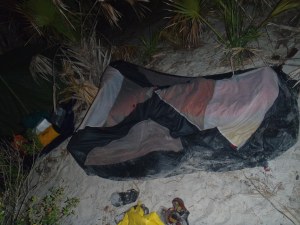