As the headlights came closer we both could see that the truck was white.  Don’t know why most official trucks are white, but they usually are, and there was a symbol on the doors.  Yep, it was the “man” for the park that we had landed at.  We explained that we were in the UFC, had been paddling all day, and were looking for a place to stop for 5 hours of sleep.  We also explained that we were experienced campers and when we leave a site, there is no trace of us having been there.  He listened patiently 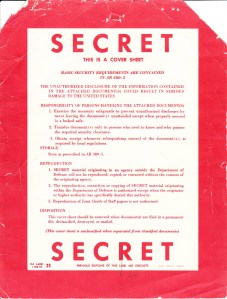 and then said, “You know that overnight camping is not allowed here.”   BREAK – The details of what happened next have been classified as “SECRET.”  Not so much to protect national interest, but to protect the good-hearted, and as such will remain classified SECRET until 07/06/32.  BREAK

I slept great that night and wished I could have slept longer but we needed to be moving while it was still dark.  As we paddled up the intercoastal we could tell the wind was blowing pretty strong from the east but we had the protection of the intercoastal.  For once we were not fighting the wind.  We were making pretty good time and approaching a major port called Port Everglades. This port has a lot of ship traffic, both cargo and cruise line.  The ships are big with limited maneuverability which means little boats need to have their “A” game on and be prepared to take whatever actions you have to in order to stay out of their way. 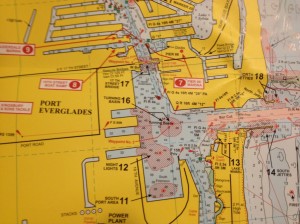 “Rules of the Road” are the big guy has all the the rights. This is a picture of the port with north at the top. We were approaching from the south through the intercoastal.  As we got closer to the port I saw this huge cruise liner coming in.  The thing was so big that at first it looked like one of the condos that lined the beach.  A few important questions quickly came to mind…  Where is this Godzilla of cruise ships going to dock?  How do we stay out of its way?  And, how soon will it be before port security detects us?  Of course they will hold us for whatever questioning they feel necessary.  I mean think about it, from their viewpoint who, other than someone up to no good, is paddling this early in the morning, in the dark, in two small stealthy boats, in the middle of Port Everglades, next to a huge cruise ship?! Yeah, we are in for some serious interrogating so get the IDs ready.

Rod’s expertise is paddling rivers.  My expertise is the open water and I have experience dealing with ships.  So I am the one pushing Rod to stay as close to the eastern shoreline as possible.  I want to stay as far away as possible from this big boy and also see if we can get past port security.  The plan was that once the ship passed, we would pass behind its stern,  then shoot across the channel and pickup the intercoastal north of the channel.  I thought the ship was going to turn south and dock starboard side on the west side of the channel.  This would have the stern moving away from us and this would also have been the best maneuver for us to get past.  Unfortunately for us, it didn’t do that.  The ship came in, stopped, then started to twist the stern around and dock port side to.  Great!  We were already heading out into the channel and this ship is now twisting around and the stern is consuming real estate between us and it.  A little stressful.  Felt like a mouse playing in an elephant’s domain, but we were making progress.  Thankfully the ship stopped its twist and started angling the stern towards the dock and away from us.  Even though it was dark, I knew we were close to the middle of the channel because of the wave actions we were feeling.  We were uncovered and not getting the protection of the intercoastal.

Have you ever had the feeling someone was watching you?  Well I was getting that feeling big time as we were paddling.  I was really focused in on watching the cruise ship that was docking but it was the hair on the back of my neck that was giving me a creepy feeling.  I couldn’t ignore it and turned and looked out toward the entrance of the channel.  Oh my.  OH MY.  OOOHHHHH MY!!!   ROD, GO GO GO GO!!!!!!! ANGLE STRAIGHT ACROSS THE CHANNEL!!!!!!!!  I couldn’t believe it, I was staring at a massive dark bow of another cruise ship that was coming in behind the first one.

I couldn’t believe that we had not seen it. We were so focused on the other ship that we didn’t see this one coming in.  As I was paddling like a mad man, I couldn’t believe that the bearing on this ship was staying constant.  In the maritime world, a constant bearing means you are on a collision course.  I was both scared and really pissed.  Scared because I knew the probability that the Officer on Deck of that ship could see our little stern lights, was slim to none.  Especially with the lights of the other cruise ship as a back drop. Radar?!  Shoot, we would’t be a blip on his radar and he wouldn’t be looking at it anyway this far into the harbor.  The other thing that I knew was even if he saw us, he was in a confined space.  He couldn’t slow down any more or he would lose rudder control.   And if the decision was running us over, or ensuring his ship didn’t go on the rocks, I think we all know what he would decide.  That’s what I would have done.  I was really pissed off at myself for getting us into this situation.  I know better.  Who doesn’t?  You look both ways when you cross the street so wouldn’t you do that crossing a channel?  My situational awareness was flawed.  Keep paddling, keep paddling.  Put the anger to work paddling. Slowly but surely our bearing to the ship’s bow started to change.  We were making progress and could see the waves of the shallow area on the north side of the channel.  We were not going to be a bowsprit of the Love Boat!

After catching our breath, we started paddling to the northern intercoastal connection from the port channel.  Then we saw the blue lights of the port security boat coming for us.  Sure could have used those lights five minutes earlier.  I don’t know if we were in such shallow waters and paddling away from the channel that they let us go or that they just didn’t see us.  Either way, they passed by us and headed towards the second ship coming in.  Kayaks and canoes are hard to see at night because they are so low to the water and the little stern lights can be blocked by the paddler’s body.  So it didn’t totally surprise me that they didn’t see us.  I am glad they didn’t.  I’d had enough excitement for the day and there were a lot more hours left in it.