I guess the rat that Rod had seen when we landed on the island decided to move to a different part of the island, or was a rather stealthy rat, or I was so tired I didn’t hear it.  I slept great at this campsite and felt pretty refreshed when I woke up.  We really had been pretty lucky in finding campsites and I hoped our luck would continue.  We had many more nights in front of us.

During the first part of the UFC when we were having to paddle in some very difficult conditions, I never found myself getting bored.  The difficulty, the pain and constant efforts to figure the next move kept my brain pretty engaged.  Paddling in good conditions is nice but unless there is some radical scenery

change, it can get pretty boring.  Especially in open smooth water where you cannot see the bottom.  Counting paddle strokes gets old pretty fast for my brain. Rod and I were lucky in that we had each other to talk to which would break the monotony.  But neither of us can hold a conversation for fifteen hours straight and there are only so many life stories you can tell each other.  One of the nice things about having individual boats is that if you wanted to get away and be by yourself, you can. Folks paddling tandems don’t have this luxury.  Next to talking to each other, the next best thing to break the boredom was music.  I started the trip off with an Apple iPod Touch and Rod had a waterproof AM/FM radio from Radio Shack.  For both my phone and my iPod, I had tried to implement measures to protect them from the elements.  For the iPod, I had a waterproof bag that had a wired connection that allowed me to connect ear buds without opening the bag.  I also had an external battery source that used AA batteries.  I thought this was a pretty good system but found out later it wasn’t full-proof.  That is a story for another blog.

Someone asked me what kind of music I listened to.  I think music is a very individual thing and what one person likes, another doesn’t.  The music I listen to is not considered “main stream,” so an iPod worked great for me.  For Rod, the radio seemed to worked great. These are a few of the songs I listed to.  They worked for me, but like I said, everyone is different on their music taste.

As we paddled north, the wind started to picked up and was blowing from the east.  For most of the morning this wasn’t a problem because we were pretty much protected by the eastern shore of the Indian River, and the wind wasn’t that strong.  This changed when we 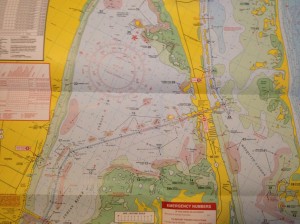 passed Titusville.  Here, the Indian River dead ends and we needed to cross over to Mosquito Lagoon.  This meant we needed to paddle east north east for about 5 miles to get to the Haulover Canal.  I guess we had gotten kind of spoiled by not having to paddle for hours on end into the wind because these five miles seemed to be extremely difficult.  One of those put your head down, keep paddling and don’t get bent out of shape because of the slow speed.  Finally, we entered the canal and thankfully the current wasn’t unbearable.  Things did turn around once we exited the canal.  We were headed north. This meant I could use my sails.  Wow, the last time I had my sails out was crossing Biscayne Bay.  The next ten miles were great.  Rod was able to draft behind me and whatever time we lost fighting the wind to get to the Haulover canal we were making up.  It was a nice sail and to cap it off, we found a great restaurant in a community called Oak Hill.  It was obviously a favorite among the locals because it was pretty crowded.  As with the other restaurants we visited, people were very friendly and very curious about our rigs and what we were doing.

It was always hard to get back in the boat after a great dinner and this time was no different.  It was still day light and we had more miles to cover so back into the boats we went.  The next big town we would pass through was New Smyrna Beach.  In looking at the charts, there were no obvious islands to camp on except an island called Chicken Island north of the bridge to New Smyrna Beach so that was our goal.  It was dark and late when we got up there and as we started to scope the island to find a beach area, a boat pulled out of a canal and scanned us with a spot light.  When that happens your first thought is it is the police.  We really didn’t see a good landing spot so we just kept paddling north.  The only problem was that this boat kept following us and scanning us with their

spot light even though we were hugging the shoreline.  They wouldn’t speed up or pass us and they seemed to adjust their speed to stay about 250 yards behind us. Great, we have a stalker!  Not knowing the rules in this area, we kept paddling hoping that if it was the local police, they would turn around and leave. Nope, didn’t happen. Finally, after 45 minutes of this, along with a prospective campsite approaching, we decided to just land our boats and deal with whoever was on this boat.  I was bewildered when the boat finally did pass us.  It wasn’t the police, it was just some boater out for a late night cruise.  Go figure.  In the end, he had pushed us to a pretty good campsite.  The wind was blowing so there were no bugs.  The air had some coolness to it so overall a good night’s sleep was in order.  Ahhhhhhh, take over sleep fairy.