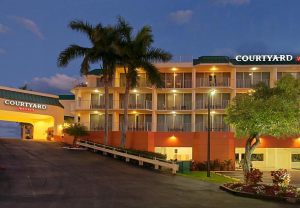 A hot shower in a real bathroom followed by a great dinner at the local seafood restaurant where I can sit in a big comfortable chair.  After the dinner a nice walk with my wife catching up on the past week.  Then end the night with a deep 9 hours of sleep in a real bed.  Oh how I had earned this night. Earned, YES, but did it happen?  NO!

The weeks before the start of the UFC I had spent a considerable amount of time trying to get all my supplies organized for the different stage points.  I had given great thought to the amount of supplies I thought I would consume and the needed resupply at the stage points.  I had plastic bins marked for each stage.  This way, Lisa just had to grab the bins marked for each stage and bring them to the checkpoint.  I had a checklist in each of the bins with the supplies that were supposed to be in each of the bins.  I had a bin that was designated as a repair bin and it was filled with every repair part and tool I thought I needed.  So this stage was the first test of my bin strategy.  It was a success in that Lisa had all the bins I needed for this stage. The unsuccessful aspect was that I was way off in identifying both how much ,and what, I would consume during this first leg of the UFC. Some stuff I thought I would consume a lot of I didn’t and some stuff I thought I wouldn’t consume that much of I did.  So that was the start of a list of items that needed to be bought.

Then there was the stuff that need to be washed.  And boy did my stuff need washing.  Folks didn’t need to fear that there was a skunk ape running around the Everglades.  The skunk ape was at the Courtyard Marriott in Key Largo, and it was me!  In fact, Lisa didn’t even try to hide the fact that she was gagging.  On top of having to get stuff washed, there was my body. 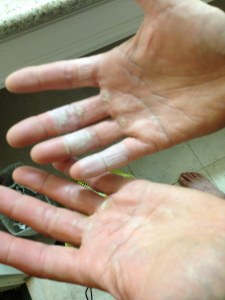 My hands were starting to show the signs of the wear and tear of the hard paddling.  Blisters were numerous and I needed different band-aids and tape to doctor them up after draining them.  Then there was the open wound on my leg.  It was really starting to get bad and I need to find a better way of keeping moisture out of it and keep medicine on it.  I knew if I didn’t get control of this, it could cause me to have to pull out of the UFC.  The other thing that became apparent was that I was losing about a pound a day and if I didn’t get control of this, it could also cause me to have to drop out.  Rod had talked about how important it was to start  a race such 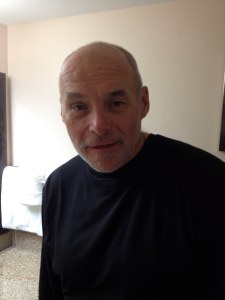 as the UFC with some weight on.  I had some weight to lose but not 30lbs.  I needed some high fat food to eat.  So the list of items that needed to be bought got longer and longer.

So the night at the Marriott consisted of a hot shower (at least that happened) and Lisa and I working our tails off trying to get ready for tomorrow.  Lisa was focused in on getting my stuff washed and buying the items I needed.  I was focused on repacking my dry bags with the stuff I needed.  I was also trying to really eliminate as much as possible some of the extra backup items I had packed on the first leg.  Anything I could eliminate was less weight in the boat and with the wind constantly in our face, any weight reduction was a good thing.  Oh, and dinner?   Pizza and salad Lisa brought to the hotel room.  Special huh?  To top it all off, I  think we got a total of 4 hours sleep that night with all that we had to do.  Just wasn’t what I or Lisa had dreamed this stage point would be. Interestingly, the other ones were no different.  I will talk about that more in later posts.

The alarm went off at 4:30 AM which was the start of day one of the second leg of the UFC. We drove over to the boat and I started packing it up.  Several Watertribers were up and about.  This is a picture of me loading my boat. 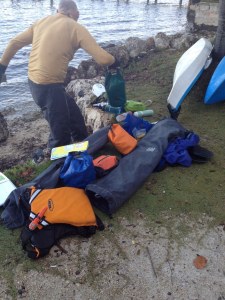 Some of them were asking if we were going to stay for the lunch and awards ceremony for the Everglades Challenge finishers.  Rod and I both knew that would mean spending about 6 hours here in Key Largo and both of us were concerned that we didn’t have a lot of buffer hours to do this. We still had a deadline of finishing the UFC in 30 days and we were behind our target schedule. So we decided to go ahead and launch.  I hated to leave in such a rush.  I wanted to spend time with the other Watertribers listening to the different experiences they each had doing the EC, but mostly I wanted to spend time with Lisa. We just didn’t have a whole lot of time to just sit down together and talk.  I went ahead and set up my amas.  I know people were wondering why I did this but the primary driver was to make more room 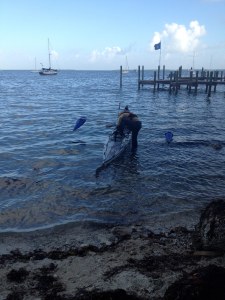 inside the boat.  I know that they caused more wind resistance but at the same time they gave me more stability that allowed me to really lean into my paddle strokes.  I am still wondering about this tradeoff but the extra room alone was worth it to me.

It wasn’t a surprise that we had only been on the water for about an hour when the winds picked up.  Right in our face.  Hey, why should we think it would be any different from the past few days? Getting across Blackwater Sound was hard but not near as hard as getting across Barnes Sound. Then we had Card Sound which was even bigger than the other two Sounds.  Card Sound leads into Biscayne Bay where we had a decision to make.  Go on the west side of Biscayne Bay, or go on the east side.  With the way the winds were blowing it seemed to make more sense to go on the east side and try to get some protection from Elliot Key.  The disadvantage to this is that it would be committing us to a 12 mile open water crossing from Elliot Key to Miami.  There are a bunch of shallow areas in this stretch of water and you are very exposed to the elements.  It is one of those stretches of water that has a serious “pucker” factor for me.  With the wind blowing the way it was we decided to go for the east side and get some relief from the wind.

It was starting to get dark as we approached the last island before the open stretch of water of Biscayne Bay.  The last island is a place called Boca Chita Key, and what a place.  It has some interesting history that this link will take you to: http://ournationalparks.us/index.php/site/story_south_florida/boca_chita_key_popular_with_biscayne_park_visitors/  This island must be party central for the big boats out of Miami because that is exactly what we found there.  Huge boats and scores of people partying. We 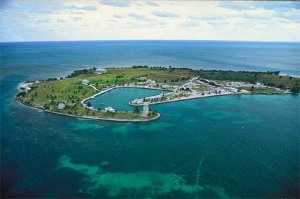 finally found a place to land our boats that gave us some distance between us and the party.  Rod and I had a strategy of trying to find islands to camp on to minimize the possibility of someone giving us a hard time.  This was the last island so we were either going to camp here or spend another 4 to 5 hours paddling in the dark across a dangerous stretch of water. Nope!  We were camping here and hoping people would leave us alone.  The bugs were not bad and we both were able to have a good meal and get our tents setup.  It felt good to get into my sleeping bag and I was looking forward to a good night’s sleep.  As I was dozing off, I was awakened by, “Hey man, let’s go @#%$ with those guys camping over there.  Yeah man, %$#@ let’s do it!  It will be a #$@% blast!”…………….