Even though I could have used another two hours of sleep I slept pretty good at Sebastian.  I wished Lisa and I had more time together but that would have to wait until I finished this event.  It is kind of amazing how easy it is to fall sleep when you don’t have the most comfortable conditions but you are really tired.  Since Rod and I didn’t have that much gear out it was pretty easy to get the boats packed and on the water.  Two stages down, three more left, and we will have competed the UFC.  There was some sad news that we got at this checkpoint and that was Salty Frog had dropped out.  Salty Frog is an excellent endurance paddler with several long endurance races under his belt.  While WaterTribe challenges are classified as races, we all want each other to finish.  If you ever meet Salty Frog you will notice that there is not a bit of body fat on the guy.  He is a lean mean and very fast paddling machine.  Since the start of the UFC he had been losing a lot of weight — similar to what I had been experiencing.  The issue for him was that he didn’t start off with that much to lose and it caught up to him.  As the body starts to feed off itself, you can only go so long before serious problems develop.

The weather for the day called for very little wind which meant it was going to be a hot one. The injury on my right leg was healing up nicely which meant that problem was going away.  Unfortunately, I had two others starting to develop.  These two problems stayed with me the rest of the UFC.

The first problem I was experiencing would show up about an hour and half after I started the morning paddling.  Up to this point my breakfast routinely consisted of a bottle of Ensure, a piece of fruit (apple or an orange), some multi-purpose vitamins, a “Breakfast on the Go” by Emerald (essentially a nut and granola mix), and a Hammer energy bar.  I was starting to experience something that I did not experience the first two weeks of the UFC.

That being I would become seriously sleepy and I would stay in this state for about an hour and a half.  It was really pretty bad.  The sleep fairy had sprinkled her magical dust on me big time. Then all of sudden it seemed like a switch was thrown and I would be wide awake and paddling strong.  During the time where I was sleepy I had big problems keeping my eyes open and my head up.  This got to be a real challenge on days where there was no wind and the morning air was warm and humid.  I mentioned in my earlier post that Rod is a morning person and wakes up all charged up and ready to go.  We were on opposite sides of the energy spectrum.  This is where I discovered what folks mean by sleep paddling.  Yes, I was paddling, but with my head down and my eyes closed.  I was moving the boat but it was at a speed that was nowhere near what I would normally be maintaining when I was wide awake.  Rod would end up quite a distance ahead of me when I could finally get through the slump.  For the rest fo the UFC I would have this problem and it seemed to be unaffected by how much sleep I got or how big of a dinner I had the night before.  The two days where it didn’t happen was when I was facing some challenging navigation situations.  I guess the stress of that kept the sleep fairy at bay.

There is no doubt in my mind that your body chemistry changes when you are doing a multi-day endurance event.  I started experimenting with different food protocols for breakfast but the same thing would happen.  As I look back on it, I think my body was having problems locating fat reserves to turn into energy.  For my body, after about an hour is when my body starts the process of getting fuel from fat versus the glycogen in my muscles.  I think the dinner and late night snack (mixed fruit cups and fig newtons) was building glycogen in my muscles but due to the amount of fat I had lost, my body was having problems starting the fat to energy conversion.  I do feel the Hammer energy products helped me through the slumps but it was a big time mental war to not stop and fall asleep.  Thankfully Rod stayed with me as I went through those periods.  He could have easily paddled away because he didn’t seem to have this problem.  It seemed like his energy levels would run low in the late evening and he would fight the sleep fairy then.  It was during one of these morning struggles that Rod gave me a product called “Five Hour Energy.”  He even had some Extra Strength Five Hour Energy that he would save for a last-ditch effort to stay awake.  They did help, but didn’t make the sleep fair go away.  I ended up just sucking it up and developing the mental stubbornness to deal with it.

The second problem I started to have is a pain in my right hand.  I had several finger nails that had been banged up and had blood under them.  I was pretty much expecting this.  It has happened to me before in some of the other races I have been in.  Usually it is caused by a wave that slams my paddle into the boat and my fingers are the only thing between the boat and the paddle.  It does hurts when this happens and it really hurts when it happens to one of the nails that already has some has blood buildup under the nail.  As I stated in a previous post, I had blisters on my hands, but I had also expected this and was following my plan on doctoring them every night.  So those two issues I knew I would experience and I knew how I would manage them.  The pain in my right hand was different.  It was some nerves screaming

they had enough of this craziness.  I found the pain to be pretty intense for the first 45 minutes and then slowly my hand would go numb. When this happened, the pain went away and would stay away for the rest of the day.  I would have this numbness, but I would still have enough feeling in my hand to control the paddle.  I guess at night the nerves would start to heal because the numbness would be gone in the morning, no pain and my fingers would be stiff.  With some rubbing and working them I would get them moving but there still wasn’t a lot of pain.  That would immediately show up when I took my first stroke.  This condition got worse, would cover a larger area of my hand, and a duplicate condition started in my left hand with each passing day of paddling the UFC.  The not-so-pleasant part about nerves is that it is pretty painful as they start to heal and they heal slowly.  So finishing the UFC started that process.  It took about two months to get my hands where I wouldn’t have any pain when I used them.  Mornings were the worse and for several weeks my first order of the day after waking up was to put my hands in warm water to get them to loosen up.

Today, 4 months after completing the UFC, I feel I have recovered pretty well.  I no longer have problems fighting the sleep fairy during the day.  That was interesting considering that my job requires me to attend a lot of meetings and some of them can get pretty boring. Some of my co workers must have thought I had a bladder infection due to the number of times I would leave a meeting.  What they didn’t know is that I wasn’t going to the bathroom, I was trying to wake myself up.  As far as my hands my nails are almost back to normal. The nerves in my hands, well I started paddling  about two months after the UFC.  My hands were not completely healed but I really needed to get back on the water. Everyone has their escapes from the pressures of life.  For me, being on or in the water doing some type of physical activity is my escape.  Not being able to enjoy those two activities results in a very grumpy whale.  I still have times, like this morning , that I still have to soak my right hand in warm water to get it working without any pain in two of my fingers.  I have tried to mix in some different types of paddling (kayaking, SUP, and dragon boating) to avoid the same exact repetitive motion that I had in the UFC.

The first day of stage three Rod and I got in some pretty good mileage and ended up stopping at an island just north of the bridge for A1A going to Port Canaveral.  The island 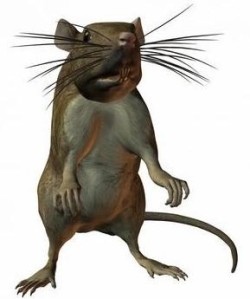 had  a small beach and a flat area big enough for a couple of tents among a bunch of small trees.  It was dark and Rod got out of his boat first.  Then, all of a sudden, I hear him yell, “Rat!!!!!  A Big One Too!!!”  As I look up, I see Rod getting a stick and moving back to the boats.  That rat is coming back!  He is not running away!  I never really saw the rat but I did hear it so it was big.  It really had an impression on Rod because Rod kept shining his light into the bushes and watching the bush line for the rat.  Being the nice guy that I am, I let Rod have the camp site closest to the

place where the encounter with his buddy the rat had occurred.  I didn’t want to interfere with this new friendship.  I also decided that my python eliminator could also be used as a rat eliminator and I kept it close by as I made my dinner.  In fact, I used it to open my dinner just in case the rat was watching.  Not only was the rat big I think it must have been pretty smart  because it never came out while I was eating my dinner. Ahhhhh No worries here.