The campsite we were at was one of my top five most favorite of the UFC. It was quiet, I slept great, the boats were easy to unpack and pack, and no bugs.  Hey we were living the good life.  I really didn’t want to leave but I also knew that if we put in a long day today and covered our planned miles we would be able to make our next check point, Fort Clinch, the following day.  That would mean fresh food, a shower, and maybe a night in a hotel.  St. Augustine was the next big city that we would be coming up to.  My primary concern was that we would hit the tides right. 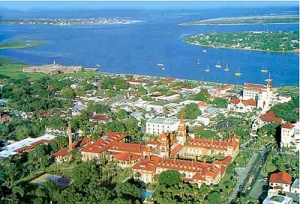 St. Augustine’s inlet is a large one which means the tides can be pretty strong which could make for a very long day if we had an incoming tide.  As I had mentioned in my earlier post, Rod and I didn’t spend too much time trying to figure out departures times relative to tide shifts.  We just stuck to a normal schedule and hoped for the best when it came to the tides.  There is also a school of thought that says you are going to fight the tide no matter what you do.  You either fight it approaching the inlet, and then run with it once you have passed, or you run with the tide to the inlet, and then fight it once you have passed the inlet.  As we started the morning out I noticed we had the tide with us. Sweet!  We were going to have the tide with us to St. Augustine.

As we approached the city of St. Augustine, I notice a boat with a young family in the shallow section of the river.  At first I thought they had purposely grounded their boat there and were enjoying a swim.  Then I noticed that they were waving at the passing powerboats.  They were in trouble.  They had run aground and the tide was going out.  I felt  bad for the Dad.  Here he was stuck with his wife and two young girls.  I was shocked at the number of power boats that just went right by them ignoring them.  How could they not see them waving.  At first I thought there wasn’t much Rod and I could do.  We don’t have an engine to pull them off and we couldn’t transport them to shore.  Then it hit me.  I saw a small power boat with two young guys heading our way and they were close. Maybe, just maybe, I could paddle close enough to get their attention and direct them to the family.  As luck would have it, these two young men knew the mariner’s rule of helping another mariner in distress.  Even though their boat was smaller than the one beached, they went over and got the young family’s boat off the beach.  Today was turning out to be a nice day.

Once we got within sight of the St. Augustine marina, Rod went into restaurant searching mode.  I mean how was he going to miss here in St. Augustine?  The place has numerous restaurants along the waterfront.  Tourism is one of the big draws to the city and what would it be without great food.  We pulled into the mariana, docked or boats, and hit the first restaurant right by the water.  What made it even better was there was a clean public rest room where I could wash up.  Sometimes that was as good as the fresh food.  Not quite as good as the cold cokes though.  As we were paddling to the docks both of us couldn’t help but notice that the tide was pretty low.  There were mud flats all over the place.  Hmmm, could it be that we had perfect timing?  Could it be that we had came in on an outgoing tide and could possibly pass the inlet and then have an incoming tide? No way!  That would be just too good to be true.  The meal itself was expensive.  It wasn’t the best of the trip but it sure beat a dehydrated meal and the cold cokes were outstanding. 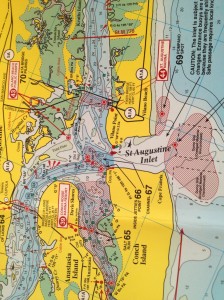 slack which would mean pretty shortly it would switch to an incoming tide.  We couldn’t have timed it more perfectly.  Hey, even a blind squirrel finds a nut sometimes!  The crossing was very non-eventful and we headed into the Tomalto River.  The further north we paddled on the Tomalto River the narrower it became until we hit a section just north of Cook Landing.  If you look on a chart you will see that the ICW is pretty narrow  and very straight through this section.  On one side of the ICW is the Cabbage Swamp and on the other side are these beautiful waterfront houses in a subdivision called Palm Valley Landing.  I guess the folks that live here work in Jacksonville. There is one road in and out of this area and it is a very long road.  From the water it is really a very beautiful section of water to paddle in.

Up to this point Rod and I had been very lucky in finding camp sites.  We had always seemed to find one without a lot of time spent looking. We had passed several nice spots earlier in the day but it was too early to stop then.  We needed to get in as many miles as we could today to ensure being able to get to Fort Clinch in the day light hours tomorrow. So when it came time to look for a camp site for the night it was dark and the ICW banks had changed.  Instead of solid ground we were now looking at shorelines of grass and marshes.  We started working the shorelines and for those that have paddled at night they can tell you that things don’t look the same at night.  What appears to be a solid bank from a distance will end up being a line of grass when you get right up on it.  We kept passing one marsh and grass line after another and it was getting later and later into the night.  The only positive was that we were still making head way north but it was slow going.  I could tell that Rod was tired and ready to call it a night.   He headed to an island that was shown on the chart. The only problem was the 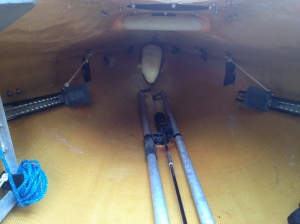 island was surrounded by 25 yards of this short weed grass in very shallow water (1-2 Inches).  This is when Rod stated, “Hey, this should work.  We can sleep inside our boats.”  I am saying to myself, “Do what???? You have got to be kidding!”  I know he was tired, and I was too, but there was no way I was going to get a good night’s sleep inside my boat.  Yes, I could get inside of it but it was wet and dirty. Just wasn’t going to happen.  I would rather spend another three hours paddling versus trying to sleep there.  This is where being easy to get along goes a long way.  Rod listened to my argument, agreed to continue paddling on, but closed with, “Ok, but you will have to find the spot because I am tired of looking.”  As I looked at the chart there was a lot of green showing on the banks in front of us, meaning nothing but marshes.  But there were a few spots of yellow.  Well we got lucky as one of the those yellow spots turned out to be a small beach big enough for both of us to set up our tents.  Ahhh, sleep at last!!! 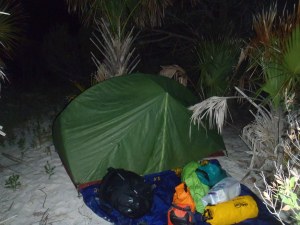