With our stomachs full, our water bottle topped off, and our visits to the nice clean bathroom complete we left the marina at Marco Island.  The current was still running strong but we were paddling strong so we were making pretty speed.  The wind had picked up quite a bit but Big Marco River wasn’t that far and it gave us a lot of protection from the wind.  This was about the time that I gave up on any hope of sailing.  I beached my boat and took down my mast, lee board and big sail.  Both Rod and myself left our PAS sails stored on the deck. This sail is a smaller sail, but it is pretty easy to deploy and store.  In my wildest dreams I would have never predicted that my sail equipment would stay stored for most of trip.  The paddle down Big Marco River wasn’t that bad but as we entered into Coon Key Pass we started to get a taste of what the wind was going to be like on the outside.  The wind was strong and out of the south.  Not what we were looking for.  In the past I have always gone to Check Point 2 (CP2) from Marco Island by entering the Gulf of Mexico at Coon Key, paddling the roughly 14 miles to Indian Key and then taking Indian Key Pass to Chokoloskee Bay.  Once in Chokoloskee Bay, you have a couple of options to get to CP2 depending on the tide.  For a Watertriber who is covering 50 plus miles a day, 4 miles is not that big of a deal — unless, of course, Ms. Gulf Of Mexico is upset and all pissed off.  If that is the case, those 14 miles become the longest miles you have ever paddled.  The area this 14 miles parallels is called the Ten Thousand Islands, and for a very good reason.  If you look at a chart, it looks like there are ten thousand Islands in this area and it is a maze to get through.  This picture might give you a feel of what someone is trying to navigate through.

This navigation challenge is why everyone normally goes on the outside and travels through Indian Key Pass to get to Chokoloskee Bay.

As with most things in life, there is always someone out there who might have just found a different way to do something.  You just have to find that person.  Well, I had always wondered if there was a way to go from Big Marco River to Chokoloskee Bay on the inside of the Ten Thousand Island.  On the charts it just didn’t look possible, but I got lucky.  I not only found two Watertribers who knew of a way through the inside, but one of them had actually paddled it.  My wife thinks I am the ultimate Boy Scout in that I am always trying to prepare for a worst case scenario.  I personally think it is the military training coming out in me.  In the military, you are taught to always have a contingency plan because no plan survives first contact with the enemy.  So prior to the start of the UFC, I was able to get a chart with a route shown with a 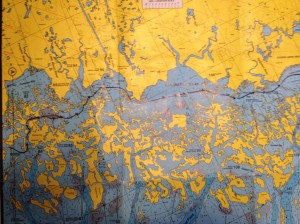 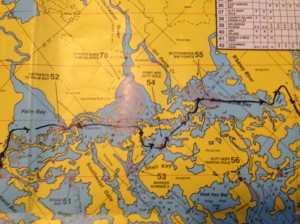 marker. This chart, along with Google Earth and several late nights, gave me some confidence that a route did exist IF, and I do mean IF, the tides were right.  With a low tide it was highly doubtful you could make it through the area.

As we approached Coon Key, I didn’t have a good feeling about the condition of the Gulf.  At the same time, I didn’t have enough confidence in the inside route to suggest to Rod that we change our plans from the outside route.  I just kept thinking that the Everglades Challenge had taken place for years, and in all those years, only two people knew about the inside route and only one person had actually paddle it.  If it was as good as it appeared, then lots of other Watertribers would have already taken it.

The lee side of Coon Key wasn’t half bad but as we rounded the key and headed south, Ms. Gulf of Mexico unleashed her anger on us.   My only thought was, “Oh my, we will be working HAAARRRDDD today!”  The winds were so strong we were left with no choice but to island-hop paddle.  This meant changing our course to the closest island that was in roughly the same direction we needed to head, burning all sorts of energy due to how hard we were paddling, and then resting up in the lee of the island to build our reserve to repeat the process with the next island.  It was slow and hard going.  I felt like it was Tampa Bay all over again but instead of 7 miles to cover, we had 14 miles.  I am a firm believer that in these events you must have the fortitude to stick to your plan.   I also believe there comes a point where you have to say your plan isn’t the best plan.  I think I reached that point at Dismal Key Pass.  I wonder if the person who named that pass had a similar day as we were having when he or she named it.  Between waves and wind gusts, I was able to look at the map and saw a marked channel just south of Panther Key that lead into the inside of the Ten Thousand Islands.  I also saw that Panther Key was the next big island in front of us.  I had also reached the point where I was ready to attempt the inside route.  “Time for a meeting!” I scream to Rod.  We made it to Panther Key where I brought out the chart and put on my best case to convince Rod that we needed to go down Panther Key Pass and attempt the inside route to get to CP2.  We both knew that the deadline for getting to CP1 had been extended, but the deadline to get to CP2 had not.  We really needed to get to CP2 today. Now I really think Rod wanted to just keep slogging it out with the wind and keep on the outside because we knew the route.  Ultimately he gave in to my suggestion and we headed around Panther Key and into Panther Key Pass.  It took us about an hour to get into the narrows of Panther Key Pass where the paddling got a lot better.  We had protection from the wind which was great!  Funny though, how once the main cause of whatever problem you have is gone, you start to rethink your decision.  Now in the pass with the wind and waves at bay, I was in serious rethink mode.  It is getting dark.  We are going to be navigating where there are no real bearing markers through the Ten Thousand Islands, following a route that I have never been on and the navigation is all on me.  And it looks like the tide is going out.  There may not be enough water to get through. What have I gotten us into?!

I think the strength of any relationship is forged in the world of conflict.  I firmly believe that if you look at any successful relationship you will find a long history of successful conflict resolution.  Well, Rod and I were going to have our first test.  Rod is the type of guy that once he starts on a plan, that is the plan.  He will drop dead in exhaustion attempting to accomplish the plan.  Which is kind of amazing that I got him to change our route in the first place.  Now that we had changed our original plans, I wanted to explore the possibility of changing it again.  I wanted to make sure he understood all the risks that we were taking and now was the time to change our plans if we were going to change them again.  “Hey!  Time for ANOTHER meeting!”  (Gulp! I was waiting for an emotional explosion.)  Rod’s reaction at this point told me a lot about the individual I was paddling with.  I could tell my latest request had really pissed him off, but he didn’t explode.  He stopped, listened to my points and my concerns, and then responded with, “The inside route is our plan now AND WE ARE STICKING TO IT!!!!!”  Wherein I responded, “OK.”  Now, the next 30 minutes of paddling in silence was awkward, to say the least, but that didn’t last long.  I knew right then that not only did I have one strong paddler with me, but I also had one heck of a person to paddle with.  As we paddled down the channel, and just before entering Faka Union Bay, we saw this  kayaker.  It is getting dark, we are in the middle of the Ten Thousand Islands, miles from any civilization, who in their right mind would be paddling a kayak now?  A Watertriber of course!  “Hey! I’m Stripbuilder, who the heck are you and what are you doing back here?”