Since we got into CP2 so late we decided to sleep in a couple of hours.  Even though my tent was close to the main road into Chokoloskee I slept pretty good.  I guess you do have to look at what kind of night life there is in Chokoloskee.  Two words, “Not Much.”  Other than the bar by the airport it is very quiet and not a lot of late night traffic in these parts.

The extra sleep was nice but even with that no one seemed to be in much of a rush to get packed and launched.  Really two reasons for this.  The first was that Rod had heard that the store near the boat ramp had great breakfast sandwiches.  The food hawk had identified his prey but the shop didn’t open until 8:30.  The other reason was trying to decide what to do about the weather.  Seems like Watertribers fall into two groups on what strategy to pick to deal with the weather.  There is one group that looks at all the weather reports and then picks a launch time and route that minimizes the effect of the weather. Great strategy if the weather reports are correct.  If the weather reports are wrong, you might find that you have wasted a lot of time sitting on the beach and then end up launching in weather worse than what you were trying to avoid.  This is the strategy that Jungle Jim was following and why he was still at CP2.  That was kind of a let down.  I had a fleeting thought that we were keeping such a good speed we were keeping up with him. Wrong, he had been at CP2 almost 12 hours.  The second strategy is to listen to the weather reports and only adjust the route you go but not your launch time.  Sometimes this can result in a long hard day of paddling, but for those that follow this strategy the feeling is that every moment you are paddling is progress.  It might be very little progress but it is progress.  This was the strategy that Rod and I seemed to gravitate to.  That is unless fresh food is involved and delaying a launch seems like a good idea.

As I was planning my routes for the UFC I had a thought of doing the Wilderness Waterway (WW) through the Everglades versus going on the outside.  To date, no one has completed the UFC through the WW.  The primary reason for this is that the WW is longer and has some passages that slow you down and can be a little difficult.  One of the passages has the name “Nightmare” which gives you some idea of the difficulty of that passage.  In fact, GitUrDun and myself had tried to get through this passage on a fun trip and ended up having to turn around because of the downed trees across the passage.  So, in the comfort of my home, I dreamed about being the first person to do the UFC through the WW.  The problem with that now is that we were already behind schedule to hit the checkpoints by the required times and adding more miles and time was not a great option. The weather forecast didn’t sound very good at all.  Winds 15-20 from the south until mid afternoon when they would die down.  Great, right in our face!  Do we delay our launch? What happens if the weather reports are wrong?  Even though it is longer, do we start out in the WW that will provide more protection from the wind and then cut over to the outside?  Do we go on the outside and island hop?  Oh man, when does this shop open? Do we….?  What about this…..?  Of course you have the dynamic where everyone has an opinion but no one has enough confidence in their opinion to boldly state a course of action.  “Hey lets eat first and then make a decision.”

This is a picture of us deliberating over our decision.  I don’t know if the sandwiches we got were in actuality that good, but at the time, I thought it was the best egg sandwich I had ever had.  And the orange juice was of out of this world.  As we were eating, Jungle Jim, Salty Frog, GhostYaker, and BustedRudder came wandering in.  They were following the same strategy as us.  Not making a decision  on an empty stomach.  With our fuel tanks topped off we headed down to the boats.  We were going to launch and start off taking the Wilderness Waterway hoping this would give us some protection from the weather.

This is a picture of us getting ready to launch.  Notice the mud. 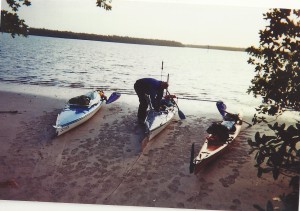 This is a picture of Stripbuilder.  Hmmm, wonder where he got his tribe name from.

Kayakslike his are a work of art and not for guys like me that are pretty hard on their gear.  I think it belongs on a wall versus out on the water.  He built his paddles too.  Both beautiful and impressive.

This is Rod and doesn’t he look ready to go?  Note his PAS on the deck.  Nice thought, but he didn’t get to use it.

So damn the winds we were off and following the Wildness Waterway.  At least we had a good breakfast!