The Wilderness Waterway is really a pretty neat route through the Everglades.  Navigation is fairly easy due to that fact that it is marked by the National Parks Service and most of the waterway is made up of rivers and small bays. The scenery is pretty and there are different things to see.  This is a picture of one of the rivers we were on.

The other thing which makes the waterway a nice route is that there are camp spots that are either solid ground sites or chickees on the water at various locations.  These camp sites not only offer a spot to get out and stretch the legs but they also have potta johns on them.  Now there might be some bugs in porta johns but those bugs can be easily encouraged to find a better spot to hang out.  Which leaves you a nice place to take care of business versus a hole in the ground with nothing but a bunch of bushes to hide in.  The other thing about the camp sites is that they are usually located in some places with a lot of history.  I always find it interesting to be walking on some piece of ground and thinking about what was going on that piece of ground way back when.  The spooky part of this is that on some of these sites there were some not very pleasant things going on.  If you are ever going to visit the Everglades I would encourage you to read about the history of the place and some of the colorful people, like Watson, that lived there.  This is a picture of Rod at Darwin’s place. 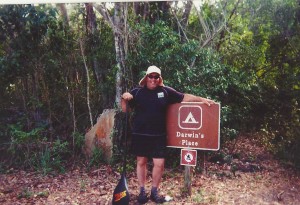 When I was in my early twenties I was invited on a fishing trip to the Everglades.  The trip was great and we stayed at a fish camp deep in the Everglades.  I remember getting completely lost as the guides drove their boat through the different rivers to get to the camp.  I remembered the owner talking about the fact that the camp was one of the few in the Everglades National Park and the federal government was trying to force him to surrender the camp.  He wasn’t giving in and was going to fight the government in court.  I have lost touch with the owner of the camp and never knew what happened to it.  Well, in one of the bays that we were paddling through, there it was — the camp I had stayed at in my twenties.  I couldn’t believe it.  It looked great.  I guess the owner had beat the government.  This is a picture of the camp.  You will not find a camp like this anywhere else in the Everglades National Park.

It was a good decision to take the waterway versus going on the outside.  The winds were really blowing and it made for some tough paddling in the bays but at least we were sheltered in the rivers.  It was on this leg of the trip that I had my first unpleasant wildlife encounter.  I have lived for most of my life in Florida and the majority of that time has been close to the water.  If you live in Florida, and near the water, you have been exposed to lots of encounters with alligators.  Due to that I had (I repeat, HAD) an attitude that alligators are more sacred of humans than we are of them and they generally want to get away from us. Crocs, different story.  They are mean, will stalk you, and you better keep your eye on them.  This is a picture of a narrow passage we were going through and I was leading. 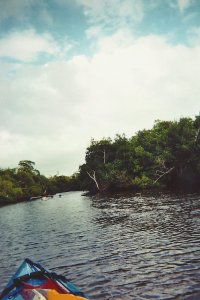 I saw the gator in the middle of the passage but didn’t think anything of it.  They always sink or swim away so I just kept paddling and was planning on passing the gator since it was in the middle of the passage. Funny, or should I say, not so funny, the gator didn’t sink and that is when I heard Rod say the gator was puffing up.  I still didn’t think anything of it and since the gator wasn’t moving I just moved over a little thinking again it would sink when I got close.  Well the gator didn’t sink.   In fact, it started to come at me. Due to my amas being out I was not in a position to slap the gator with my paddle and once the gator’s head cleared my amas, he would have a clean shot at my side.  Rod, seeing what was happening, slapped his paddle on the surface making a sound like a gun shot.  The gator, on hearing the slap dove down, but to my surprise came up on the other side of my boat.  Now, I had my paddle between the gator’s head and my side and was able to paddle away.  Never, never, will I do that again.  I am going to assume all alligators are aggressive and if they don’t move will drive my bow right at them versus gliding pass them.  Glad Rod was watching and thinking.

It was starting to get dark and we had a decision to make as we entered Onion Key Bay. Keep following the Wildness Waterway or take Lostman’s River to the outside.  Lostman’s River had a very shallow entrance but if we could get through this shallow area we could have access to Highland’s Beach and some great camping sites.  If we stayed on the Wildness Waterway, we would have to go quite a distance to get to the next camp site. The winds had died down and we thought the tides looked good so Lostman’s River, here we come.

The trip down Lostman’s River was uneventful.  It was dark but with the moon we had, we could navigate pretty well.  In fact, we could see a green light way down a couple of miles down the river.  Odd, considering we were in the middle of the Everglades and there were  no markers or lights shown on the chart.  But sure enough, there was a green light.  That green light turned out to be a boat with two guys on it that was hard aground.  The tide was going out and these boys were stuck until the tide turned.  They didn’t seem too upset with their situation.  They had a bug net over the cockpit of their boat and I have a suspicion that they had some cold beer with them and lots of it.  Although they probably thought WE were the ones drinking.  Three guys in some very small boats, in the middle of the Everglades late at night, paddling toward the shallows of Lostman’s River entrance, with the tide going out and nothing but mud for a bottom.

We knew there was a winding narrow channel through the shallows and that the GPS was not accurate enough to use to follow it. This is how the channel looks on the chart.

To help locate the channel we decided to paddle three abreast trying to find this little channel.  As we paddled out we would all call out if our paddle hit the bottom and how much depth we had.  “Hey! I got 6 inches!”  “Hey! I got 12 inches!”  “Hey, @%^*&, I only got 3 inches!  If I don’t get over your way, I am going to be a late night mud slider!”  On top of this, as we are heading out, all of a sudden my boat is hit hard by some sea creature.  Not cool!  Oh, and it doesn’t just happen one time, it happens multiple times.  And sometimes it was multiple hits at the same time.  To this day I have no idea what it was, but we were all hitting whatever it was pretty hard, so there was a big school of something with big headaches.

Even thought the tide was going out we were successful in finding the channel and navigating it to deeper water.  It really was a pretty nice night out in the Gulf.  No wind and the water was smooth as glass.  Highlands Beach was right there but if we could paddle for a couple of more hours we could make it down to a campsite called Graveyard.  Nice name huh?  Hmmmm, why would we want to paddle to someplace called Graveyard when we could paddle up to a nice beach and camp there?  Highlands Beach was tempting, but by paddling to Graveyard we would have covered the last section on the outside.  Graveyard would give us a clean shot into the Joe River.  Suck it up time.  I wonder just how bad Graveyard is???????