Other than it being so late at night, on top of being so tired, the paddle down to Graveyard was really not that bad.  The Gulf was like glass, the moon was out and we had enough subjects to talk about to pass the time and stay awake.  Even finding Graveyard wasn’t that bad.  Once we got to the mouth of Ponce De Leon Bay we just turned east at Shark’s Point.   We followed the shore line and every couple of minutes shined a light through the trees. The trick was finding the creek that led up to the campsite.  This is a picture of it during the daytime. 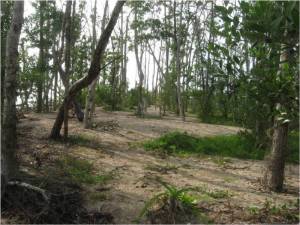 Not sure why they call it Graveyard other than there are a lot of downed trees in the surrounding woods.  Since the tide was high we were able to get our boats fairly close to the campsites which was nice.  Nothing worse than having to drag your boat through a bunch of mud to get to the campsite.

I have always tried to think through what process I would use to deal with a bug infested campsite and for this trip I had a new product to try out.  It is made by Off and is supposed to create an area around you that drives the bugs away.  What I liked about it is that I don’t have to spray anything on my skin.  This is a picture of this little device.

In talking to folks they used it they said it worked pretty good if there was no wind.  Well, as we were approaching “Graveyard,” I got the feeling that it was going to be a little buggy and was I right.  As soon as we landed it seemed like someone rang the dinner bell and the bugs jumped on us.  I quickly got my little new toy out and fired it up hoping that it would work.  Now Rod and Stripbuilder must have thought I was nuts.  They were in overdrive trying to get their tents setup so that they could dive in them to get away from the bugs.  I, on the other hand, was taking my time and going through my Mr. Clean process outside my tent.  Instead of being the main course for the bugs I was not even on the menu.  I even took time to cook and eat my dinner all the while watching a  local raccoon (a pretty bold one at that) try to get into our boats.  Hey, what more could a guy ask for?  I was clean, I had a nice dehydrated meal, and had some entertainment to boot.  Oh yeah, sleep would be good and that followed shortly after.

It seemed like I had just gotten to sleep when I heard this racket.  It sounded like something was running through the campsite and ran into one of the porta johns.  If I hadn’t have heard a bunch of talking I would have thought it was Bigfoot!  Then I heard a familiar voice.  It was Jungle Jim.  Apparently Salty Frog, Jungle Jim, GhostYaker, and Bustedrudder had decided to launch after we left Choloskee and had followed the same route we did.  Well someone was in a big hurry to get to the porta john and unfortunately all three of our boats were in the landing zone of the camp site and it didn’t make it easy.  Thankfully they made it and the Graveyard site could accommodate all of us.  If this had been one of the campsites that was a chickee, things would have gotten a little tight.  This is a picture of a chickee in the Everglades National Park. 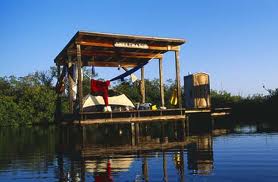 The alarm went off at 4:30 AM and it seemed like I had just fallen asleep.  I really wanted to roll over and get a few more hours of sleep.  At the same time I wanted to get underway and get through Ponce De Leon Bay before the winds picked up.  This  bay is a wide and shallow bay which means no protection from the winds and waves.  This is how the bay looks on a chart. 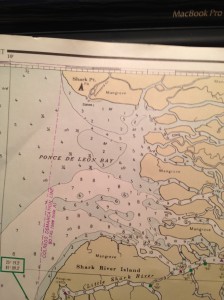 In last year’s EC, I spent several hours battling through this bay and I didn’t want to do it again.  So Rod, Stripbuilder and myself packed up and got ready to launch.  Jungle Jim got up and wished us well. I was surprised he was up considering he was operating on less sleep than we were but sleep seems to be something he doesn’t need a lot of. He would probably say it is a hold over from his military days but I would say it is because he is younger than us.  I was glad we didn’t stay any longer at Graveyard.  The tide was going out and the creek out of the campsite was almost too shallow to paddle through.  In another 30 minutes it was going to be a mud crawl with your boat in tow to get out.

Even though the tide was against us there was only a light breeze blowing so the paddle across the bay really wasn’t that bad.  Now tides in the Everglades are extremely strong and will bring a grown man to tears, but personally I would rather fight a tide than a blowing wind.  On exiting the bay and entering the Little Shark River the tide was really starting to run hard so we had our work cut out for us to get to the Joe River.  This is where I got a true appreciation for how strong of a paddler Rod was.  He just motored through the tide like it was nothing.  Whereas I was  working my rear end off and I was getting to the point where I didn’t have a lot of rear end to lose.  Thankfully, Rod being the team player that he is, would stop at various bends and let me catch up to him.  About the time we entered the Joe River the wind really started to pickup and was coming out of the southeast.  We were lucky again.  Even though the wind was blowing right at us, the banks of the Joe River gave us some protection from the wind and kept the waves low.

One of the things that I have learned in doing these events is to be cautious of letting yourself get too excited about some perceived conditions you are hoping to find at a destination you are paddling to.  For the three of us I know we were falling into that trap when we were paddling across  some open bays that were between the exit of the Joe River and Tarpon Canal.  The winds had been building during the day and were now howling across these bays.  We all knew that Tarpon Canal was a very narrow canal and connected to Buttonwood Canal which lead right to Flamingo.  I think we were all feeling that if we could just get into Tarpon Canal we would be home free to Flamingo.  Ahhhh Flamingo.  Hot shower, restaurant with great burgers, and a store with cold drinks.   If you look at the chart you will see a bay called Coon Bay. 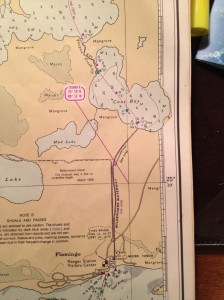 And there lied the problem.   We were not thinking about Coon Bay.  We were focused on getting into Tarpon Canal and the calm waters we would find leading to Flamingo. When we finally got into Tarpon Canal, all three of us were commenting on how rough the day had been and how good those hamburgers would be. That was until the canal exited into Coon Bay.  There were waves and waves with white caps on that bay and it seemed like the wind was blowing harder than it had all day.  I know it doesn’t help, but I was giving the wind a verbal tongue lashing. I am glad God is a forgiving God because I also said some things I really shouldn’t have.  It took forever to get  across that bay and at times I felt like I wasn’t making any headway at all.  I was just holding my ground and there was no other way to get across other than putting your head down and just paddle.  I really think it was the thought of all that was waiting for us in Flamingo that kept all of us fighting to get into Buttonwood Canal.  And what a relief It was to get into Buttonwood Canal.  There was no wind and no tide to deal with. 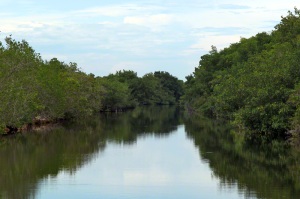 Just glassy smooth water with some pretty scenery and a few pontoon boats filled with tourists to deal with.  As we came into the dock at Flamingo I couldn’t believe it but there was Jungle Jim, GhostYaker, and Bustedruuder.  They had passed us just before we had gotten into the Joe River and had arrived a couple of hours before us.  Salty Frog came in about an hour after we had arrived so there was quite the Watertribe gathering at Flamingo.  The shower felt great and the hamburger and coke tasted heavenly.  What a day it had been.   And to think we were approximately 30 miles from Key Largo.  The only problem was those 30 miles were across Florida Bay and that bay has dished out more than a few nasty times for paddlers in the past.